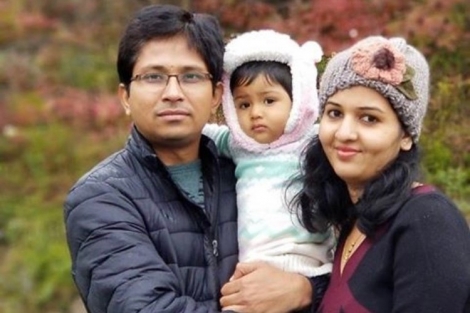 COLUMBUS COUNTY, NC (WWAY) — Highway Patrol says a child injured in a traffic crash in Columbus County yesterday has died one day before her birthday.

Sgt. Matt Young says Monika Deshmukh, 36, was driving a Ford Focus when she failed to stop at a stop sign at the end of the ramp from US 74 East to US 410 and into into the path of an oncoming tanker truck. The crash happened around 1:30 p.m. north of Chadbourn.

Deshmukh’s husband Mukesh, 37, died at the scene. Sgt. Young says Monika Deshmukh and the couple’s 2-year-old daughter Divija were airlifted to New Hanover Regional Medical Center in Wilmington and later to a hospital in Chapel Hill, where the child died.

Young said the family was from Cary and that they were headed to the beach to celebrate Divija’s birthday today.

Partha Mukherjee, a neighbor of the family in Cary, whose daughters played with Divija, said the family was heading to Myrtle Beach.